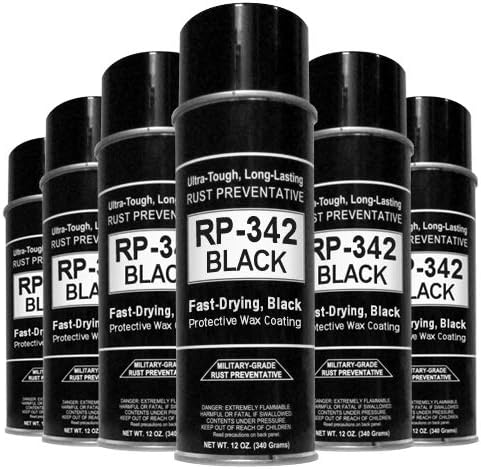 Application:
IMPORTANT #1: Make sure your surface is clean and dry (not oily or greasy) to ensure best possible adhesion.
IMPORTANT #2: RP-342 is a heavily-concentrated rust preventive. For best results, each spray can should be shaken vigorously for about 2 minutes to ensure a uniform coat. The aerosol cans should also be shaken intermittently during longer application sessions.
GENERAL INSTRUCTIONS - Spray a generous, even coating on your surface and let dry. While a single coating will provide exceptional protection, additional coats can be applied if desired. If applying multiple coats, always let previous coats dry completely before applying the next coat. Ideally, itâs always preferable and recommended to apply over a non-rusted surface, however, RP-342 can be applied over moderate surface rust. RP-342 will prevent surface rust from spreading. RP-342 should not be applied over flaking or pitted rustâ¦..these advanced types of rust should be treated prior to applying RP-342. The typical first application dry film thickness is 2.0 Mils (51 Microns).